BHUTAN – THE LAND OF DRAGAON 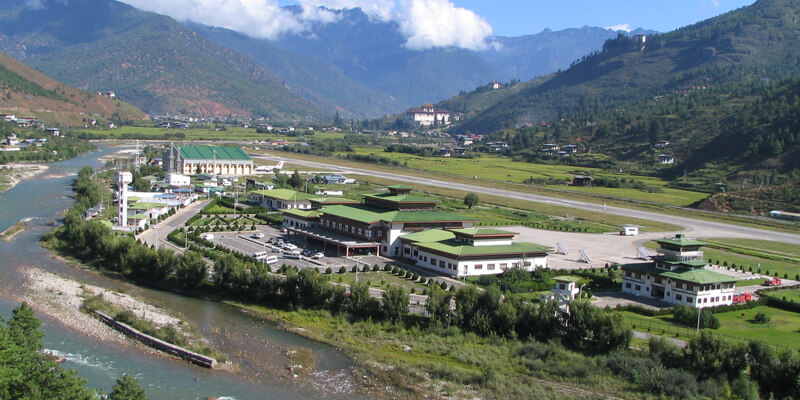 Welcome to Bhutan! Upon arrival at Paro International Airport, just outside the arrival hall, you will be greeted by one of our guides. He will introduce you to the Driver, who will drive you to Thimpu, which will take approximately 2 hours. Upon arrival, Check-in at the Hotel. Relax for few hours to acclimatize to the high altitude.
Lunch at the hotel
We start our tour at Motithang Takin Preserve, home to Bhutan’s national animal, the takin. This unusual animal is often described as looking like a moose that was stung by a bee.
We will then drive up to Buddha View Point where the Buddha Dordenma statue sits. At 169 feet tall, this bronze statue can be seen from just about anywhere in Thimphu. One of the largest statues in the world depicting a seated Buddha.
Dinner & Overnight at the Hotel in Thimpu

Breakfast at the Hotel
Centenary Farmers’ Market is where most of the locals gather on the banks of the river every weekend. Villagers from the nearby valley come here to sell agricultural products and handmade crafts. Visit National Folk Heritage Museum.Designed to resemble a rural home, this 19th-century building houses three stories of art, culture, and relics. On your visit to National Textile Museum, you will witness Bhutanese traditional weaving preserved by the Government Continue to The National Memorial Chorten built in 1974 to honor the late King Jigme DorjiWangchuck. A chorten is a hemispherical shaped memorial stupa. Known as the most visible religious landmark in Bhutan, it is used as a place of meditation.At Jungshi Handmade Paper Factory, you will witness the art of papermaking. Craftsmen demonstrate how Deh-sho paper is made using the bark of two local tree species. Buddhist monks use Deh-sho to write prayers and for woodblock printing. Having shown you the art of living and working, we will take you Simtokha Dzong, the oldest fortress in Bhutan. Legend says it was built to imprison a demon that was terrorizing the area. The first fortress of its kind, it features beautiful Buddhist paintings and carvings.Thimphu Tashichho Dzong, a traditional fortress and Buddhist Monastery, largest in the city. Featuring distinctive Bhutanese architecture, this serves as the current seat of the King of Bhutan.
Dinner & Overnight at the hotel in Thimpu 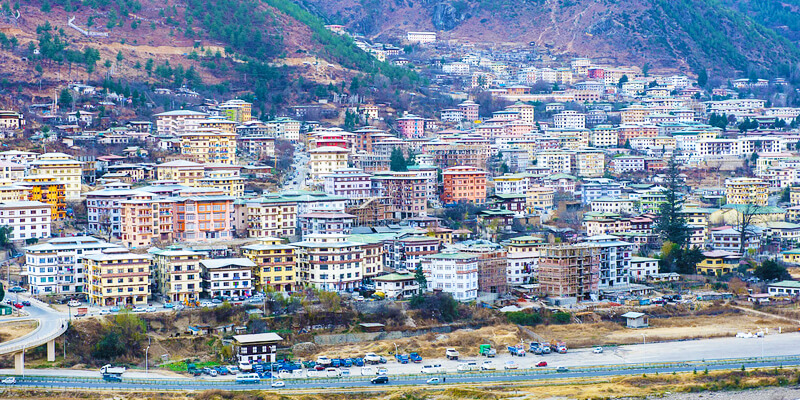 Breakfast at the Hotel
On our way to Punakha, the former capital of Bhutan, we will stop at Dochula Pass. Providing stunning 360-degree views of the Himalayan Mountains, it is also the location of the 108 DrukWangyal Chortens. AshiDorjiWangmoWangchuck, the present Queen Mother of Bhutan, built the memorial to commemorate Bhutan’s victory over Indian militants and to liberate the souls of those who died.
Sitting at the fork of two rivers, Punakha Dzong is considered one of the most beautiful spots in Bhutan with spectacular displays of Bhutanese architecture. Built in 1637, the six-story structure is the second oldest and second largest dzong in Bhutan. It still serves as the winter home of the Je Khenpo, Chief Abbott of the clergy.
KhamsumYulley Namgyal Chorten is a one-of-a-kind example of Bhutanese art and architecture, built by the third Queen Mother, Ashi Tshering YangdonWangchuck. This beautifully designed chorten took nine years to build, using only religious scriptures to construct the four-story temple. Accessible only by foot, the one-hour walk crosses over a suspended footbridge that is adorned with colorful prayer flags.
Dinner & overnight at the Hotel in PUNAKHA

After Breakfast at the Hotel, leave by Car for Bumthang Valley(known as the heartland of Buddhism in Bhutan. In 746 AD, it is said that Guru Rinpoche arrived here to exorcise a demon from the king and then converted the people to Buddhism, restoring peace to the region. Guru Rinpoche stayed in the valley to build more than 40 temples.)
Evening: Arrive in Bumthang and check-in at the Hotel
Rest of the evening Free to explore the Bazaars of Bumthang
Dinner & Overnight at the Hotel in Bumthang


Breakfast at the Hotel
In the morning, we hike to TamzhingGoemba. Built in 1501, it is an important monastery because of its direct connection to the Buddhist saint, Pema Lingpa. In the sacred monasteryKurjey Lhakhang, which houses a rock that shows Guru Rinpoche’s body imprint after he subdued the powerful ShelgingKarpo demon.
According to legend, a giant demoness was preventing the spread of Buddhism by laying her body across Tibet and Bhutan. In 659 AD, King SontsenGambo built 108 temples in one day, pinning her to the earth. Jambay Lhakhang is one of the two temples built in Bhutan that day, and every October it hosts a colorful festival to celebrate. Next on our list is visit to Jakar Dzong founded in 1549 by the great grandfather of ZhabdrungNgawang Namgyal, the father and unifier of medieval Bhutan. Known as the Castle of the White Bird, it was built on top of the hill because the lamas were directed there by a large white bird.
In the afternoon, we will take an easy hike to the Thangbi Lhakhang. Situated in the picturesque Thangbi Valley, it is only accessible by foot and across a suspension bridge.
Dinner & Overnight at the Hotel in Bumthang 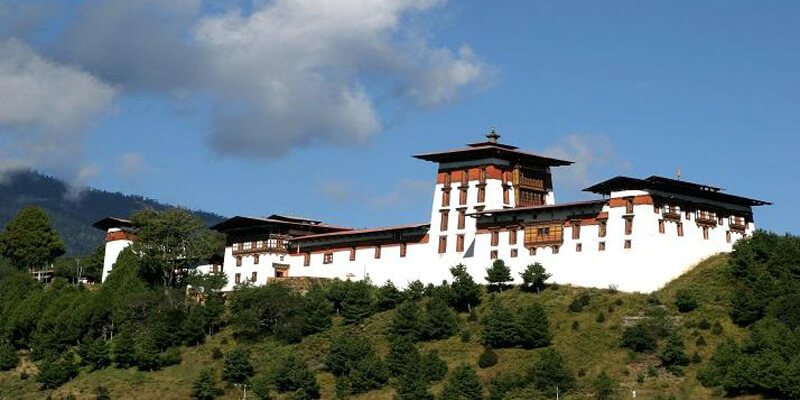 After Breakfast at the Hotel, we will proceed to GANGTEY passing through Trongsa, the ancestral home of the Wangchuck monarchy. Traditionally, each king of Bhutan has held the position of Trongsa Penlop (governor) before wearing the Raven Crown.Trongsa Dzong was built in 1644 and controlled by the Wangchuck dynasty until they became the rulers of Bhutan in 1907.
Visit Taa Dzong, a watchtower built in 1652 to ward off attacks of the town below. It now serves as home to the Royal Heritage Museum, highlighting the history of the area and the Wangchuck dynasty. Featuring Buddhist art, royal memorabilia, a 500-year-old jacket of NgagiWangchuck, and Padma Kathang’s personal copy of the handwritten biography of Guru Rinpoche.
Dinner & Overnight at the Hotel in Gangtey


Breakfast at the Hotel
Today we travel to Phobjikha (Gangtey) Valley. Known as the winter home of the black-necked cranes (Grus nigricollis), you can see 600 of these elegant, shy birds that migrate here from Tibet between November and March. This bowl-shaped valley is also a wildlife preserve, so you might also see the other native animals to Bhutan, including muntjac, sambar, serow, or yak.GangteyGoemba is a 17th-century monastery that sits on a hill, overlooking the entire valley. An excellent example of Tibetan architecture, the prayer hall (tshokhang), features eight great pillars. In the 15th-century, the Buddhist saint Pema Lingpa foretold that a temple would be built there, so his teachings could be spread. In 1613, his grandson, and reincarnation of Pema Lingpa, fulfilled the prophecy by building a Nyingma temple at the location. KuenzangChholing, the long white building nearby, is where monks go to meditate for three years, three months, and three days.
Dinner & Overnight at the Hotel Gangtey 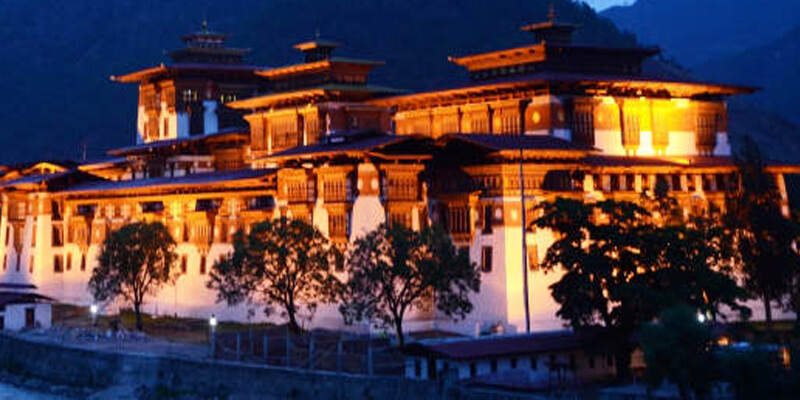 Breakfast in the Hotel
We head back to scenic Paro Valley, (home to Chomolhari (Jomolhari) Mountain, located on the northwestern border of Bhutan and Tibet. Often called the wife of Kangchenjunga, the world’s third highest mountain, Chomolhari is Bhutan’s third tallest mountain at 24,035 feet. The glacier waters flows from the mountain and feed the rivers of the Paro Valley).
Late Afternoon: Arrive and check-in at the Hotel
Visit Rinpung Dzong - means Fortress on Jewels because it was built using stones rather than clay. It is an excellent example of 15th-century architecture and one of the most impressive dzong in Bhutan. It currently serves as the government center of Paro. A cantilever bridge that crossed the river was damaged by fire in 1907 and later washed away by floods, so the original construction was lost.
Dinner & Overnight at the Hotel in Paro


Breakfast at the Hotel
We will take a two-hour hike to Taktsang Monastery, arguably one of the most photographed monasteries in Bhutan. Accessible only by foot, this sacred site was built precariously on the cliff’s edge, more than 10,000 feet above sea level. This is where Guru (Rinpoche) Padmasambhava, the father of Bhutan Buddhism, is said to have flown on the back of a tiger to meditate in a cave for three years. An exhilarating climb to the cafeteria is decorated with colorful prayer flags and provides breathtaking views of the Himalayas.
A short drive away is the ruins of Drukgyal Dzong. Now in ruins, it was built in 1649 to mark the victory of Bhutan over Tibet. On reaching the top, an amazing view of the valley greets you. A worthwhile effort.
We end our tour with a visit to Kyichu Lhakhang, one of the oldest Buddhist temples in Bhutan. This is the second of two temples built in Bhutan by Tibetan King SongtsenGambo in a single day to hold down the giant demoness who was preventing the spread of Buddhism.
Dinner & Overnight at the Hotel in Paro


After Breakfast, you will be transferred to the Airport.
With the Sweet Memory, Fly back to Home or your next destination.
Bon Voyage!